5 BASIC KITCHEN INGREDIENTS THAT WILL TREAT YOUR FLU

5 BASIC KITCHEN INGREDIENTS THAT WILL TREAT YOUR FLU

Waking up with a groggy head and stuffy sinuses can be the worst way to start the day. Hopefully, your illness is self-limiting but before we go into some natural remedies, let's first understand what we are dealing with here!

According to the CDC, 5-20% of the population is infected with the flu every year in the United States. To note, flu outbreaks are especially severe in the winter months. The flu virus, also known as the influenza virus attacks your respiratory system. It affects the sinuses, nose, throat, and lungs. Depending upon the severity of the illness, the flu can typically last anywhere from 5-14 days. It can linger on in people with compromised or weakened immune systems.

What causes the flu and how is it spread so fast?

It is almost impossible to escape the flu as all it takes is for someone to sneeze next to you. The most common mode of transmission is inhalation of airborne droplets. They can also be picked up from touching different contaminated objects such as the phone, keyboard or currency bills. People tend to be contagious even before the symptoms begin. The influenza virus is a smart one. New strains emerge every year and can pose as a challenge for the body’s defense system. Previously formed antibodies generated by the annual flu shot may help lessen the severity and duration of the disease. 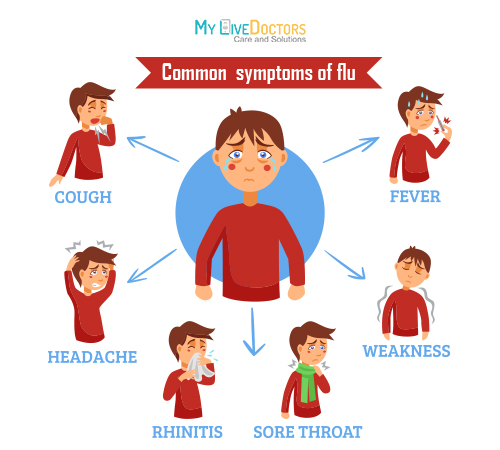 The most common flu symptoms are:

If you have any of the above symptoms and can’t make it to a doctor’s office, find best doctors online and get your flu treated from the comfort of your own home. Download a doctor availability app, Mylivedoctors on your smartphone and instantly connect to an online doctor. You can even get a prescription online for your flu.

Complications of the flu:

You may suffer only just a minor cold and rarely need hospitalization. If the symptoms don’t get better within a week and instead are draining you further, the flu may be progressing to complications such as sinusitis, pneumonia, ear infections, or bronchitis. You may experience:

Who is more likely to suffer from complications?

Most people completely recover from the influenza virus or flu within 15 days. Some individuals, however, are more susceptible and can develop complications. For instance:

How effective is the flu shot?

The advent of the flu vaccine was groundbreaking in terms of efficacy considering how expansive the influenza virus is worldwide. According to the CDC, getting a flu shot can reduce the chances of catching the virus by 60%. Having said this, this figure varies every year and ideally applies to healthy adults. The effectiveness of the flu shot is affected by several factors: 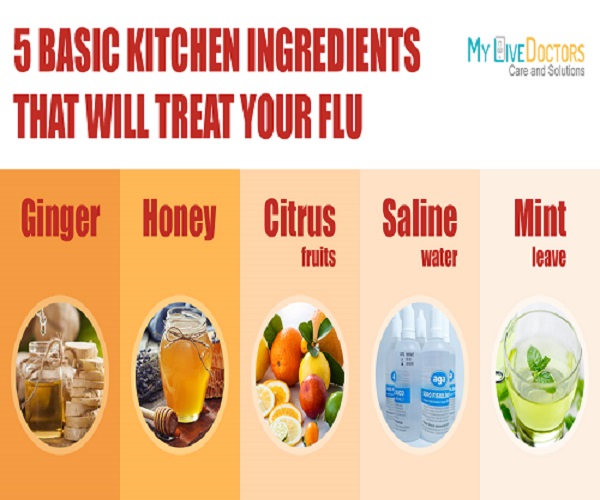 Can the flu be treated at home?

When calling in sick is not an option at work and your morning coffee doesn’t wake you up, a couple of basic kitchen ingredients can help you kickstart your day! It can save you that trip to the Doctor’s.

Sometimes you do need to talk to a physician though. Treatment of milder flu symptoms and prescription drugs can possibly be prescribed by an online doctor. Book a tele appointment with doctor with the Mylivedoctors app. For more details check out www.mylivedoctors.com.

Application has found some abnormal issue, the issue is logged. We will look this issue soon.

Sorry for the inconvenience.