ARE YOU FORGETTING THINGS MORE THAN USUAL?

ARE YOU FORGETTING THINGS MORE THAN USUAL

ARE YOU FORGETTING THINGS MORE THAN USUAL?

You could have this condition

It can be tough to receive a completely unexpected diagnosis. It’s human to think it could never happen to you. To suffer from a physical illness has its own challenges but a slow progressing illness that affects the brain, behavior and memory can be an unparalleled burden. Alzheimer’s is an example of such a condition. It causes subtle changes over time. Did you know that according to the Alzheimer’s Association, 5.5 million Americans live with Alzheimer’s dementia? Around 5.3 million are above 65 years of age and approximately 200,000 have younger onset Alzheimer’s.

Is Alzheimer’s and dementia the same thing?

Dementia is basically an umbrella term. It refers to a group of symptoms comprising of cognitive impairment that affects memory and reasoning. Alzheimer’s disease falls under this category. In fact, 60-70% of dementia cases are due to Alzheimer’s rendering it as the most common form of dementia.

Some basics about Alzheimer’s

Alzheimer’s is a chronic, neurodegenerative condition which, unfortunately, only gets worse over time. Although increasing age is a risk factor for developing Alzheimer’s, it is important to note that it is NOT a normal part of the ageing process. Age-related changes in memory are associated with occasional forgetfulness, not significant memory loss that interferes with daily life.

In its early stages, memory loss is mild and easily overlooked, but as the disease advances significant behavioral changes and cognitive impairment become evident. Individuals may have trouble responding to simple questions and may seem aloof to their surroundings. Keeping up a conversation may seem like a difficult task. Individuals suffering from Alzheimer’s may find themselves becoming increasingly unaware of their environment.

Are there any risk factors?

Experts have recognized the following risk factors which may play a role in the development in Alzheimer’s disease: 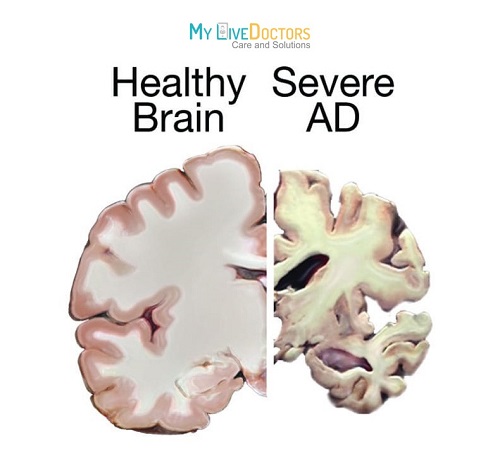 Signs and symptoms of Alzheimer’s

If you think you have any of the above symptoms and they’re a posing concern, contact your doctor as soon as possible. You can also get expert medical advice online at My Live Doctors, an online doctor app that connects you to online doctors instantly! Download the FREE app on your smartphone and book tele appointment with doctor today! An online medical consultation may give you the answers you’re looking for quicker. You don’t have to wait endless hours at a doctor’s office for doctor’s advice anymore and it’s lighter on the pocket too!

Is there a cure for Alzheimer’s?

Unfortunately, there is no certain cure for Alzheimer’s disease, but much attention and funds are directed toward research and development. The mainstay of management is mostly palliative (supportive) in nature.

Deteriorating brain health can be a devastating condition to endure alone. A great way to empower yourself is through education and awareness. Get tested for the Alzheimer’s gene. This will not only prepare you and help you manage your situation better but will make you a great empathizer of those who suffer from this condition. To support this cause, you can join Alzheimer’s walks (marathons) or donate money for research purposes.

If you are concerned that you may have Alzheimer’s or have questions about this illness please visit www.mylivedoctors.com.  You can access our panel of top online physicians from anywhere at any time. Keep your hopes up, for hope is an activity of the mind that leads to nothing but positivity and a positive mind is a healthy one!