Online health services like online medical consultations through doctor availability apps are a great way to find best doctors online. Experts say that more than 80% of non-urgent health conditions can be treated online effectively. Sexually transmitted diseases are among many health conditions that need to be addressed as soon as possible. If you don’t have the time or the means to get to a doctor nearby then connect with an online doctor at www.mylivedoctors.com so that treatment can begin.

According to a report released by the California Department of Public Health, more than 300,000 cases of chlamydia, gonorrhea, and syphilis were reported. That is 45% higher than what the figures were five years ago.

This may come as a surprise to many as sexually transmitted diseases or STDs are often thought to be prevalent in low-income regions or areas with limited resources. This is clearly not true. Most infections, in the beginning are asymptomatic and can cause serious complications if they remain unchecked. That’s why screening for STDs is so important. It will allow identification, testing and treatment of infected persons as well as their partners.

Some say that the region is afflicted by the stigma and shame associated with STDs. Health and sexual education is still somewhat brushed under the carpet and not taken as a serious issue by the community. Here are some poignant facts you should know about STDs.

What are sexually transmitted infections?

Not all infections are transmitted by sexual intercourse. There are more than 20 types of infections that are, but here are the most common ones. 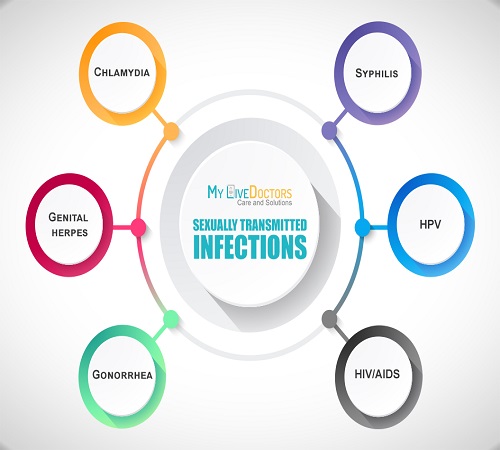 Some of the most common STDs are:

The people of California are mostly affected by syphilis, chlamydia and gonorrhea. Health officials stated that they were concerned about the occurrence of stillbirths associated with syphilis. It is transmitted to the newborn baby during birth, a condition known as congenital syphilis. There were 30 stillbirths due to congenital syphilis in California in 2017. This was the highest number reported since 1995.

What are the signs and symptoms of STDs?

The following is a list of STD symptoms in both sexes that should not be ignored.

These symptoms should be taken as male STD warning signs. It would be careless to overlook them.

Signs of STD in female:

Most STDs present with similar symptoms, more or less. Bleeding between periods, painful periods, and abdominal pain with fever can be added to the spectrum of chlamydia symptoms as well. Health officials in California say that chlamydia and gonorrhea rates are highest among individuals under 30. Chlamydia rates highest among young women, and males account for the majority of syphilis and gonorrhea cases.

When do symptoms of STD start?

It really depends on what type of infection you’ve acquired. Chlamydia, for instance, typically starts to show symptoms after 1 to 3 weeks, as is with syphilis. With gonorrhea, it is much sooner i.e. within 10 days. Again, the time can vary greatly. Sometimes, the infection remains asymptomatic for years.

So, if you’re not sure about whether you have an infection or not, it’s best you visit your healthcare provider or simply contact an online doctor at www.mylivedoctors.com. Discuss your concerns in an online medical consultation and use these online health services to book an online doctor appointment for a follow-up too!

You can even go online and search for an STD symptom checker or look up some STD symptom pictures and tally your symptoms there for a clearer perspective. If there’s something you’d like to show your doctor you can take pictures and send them to your online doctor. Online medicine services will enable you to get a prescription online too. Find best doctors online by downloading an app for online doctors called MyLiveDoctors for FREE! This online health service is not only quick and convenient but is lighter on the pocket too.

STDs is a health condition that individuals take personally. An tele appointment with doctor might be a concern with respect to confidentiality and safety. MyLiveDoctors is a safe and secure online space where doctor-patient confidentiality is guaranteed! You will have access to your medical records at all times and can even share them with another doctor if you want. Getting professional medical advice from the comfort of your own home or even on the go has never been easier. Online health services such as this have made it easier for people living in rural or remote areas to get quality healthcare. Online doctor apps like MyLiveDoctors are breaking barriers between doctors and patients in terms of distance and accessibility.

Prevention is better than cure!

Health conditions like sexually transmitted diseases are very much treatable. However, in case of delayed treatment or neglect complications may arise. This just makes it harder to treat and cost of treatment also goes up. Using an online health service like MyLiveDoctors helps you keep track of your health at all times and online doctors ensure you’re getting the treatment you need!

The CDPH Director and State Public Health Officer issued statements that "STDs are preventable by consistently using condoms, and many STDs can be cured with antibiotics," They pressed on about the importance of regular testing and treatment for people who are sexually active, even for people who have no symptoms. Most people infected with an STD don’t even know it.