When you hear the word depression, gloomy faces and grey memes come to mind. The term is loosely thrown about and terribly misused, greatly undermining the authenticity of this condition. It is often used to describe feelings like occasional sadness, indecisiveness, stress, and fatigue. Depression is not limited to a few emotions or defined by a ‘bad day’. It is in fact, a mental health issue that should be taken seriously and treated accordingly.

Depression, also known as major depressive disorder or clinical depression is a mood disorder. It is characterized by and extreme and persistent feeling of sadness that causes you to regress from daily activities. You may lose sense of confidence and self-esteem and lose interest in your surroundings.

According to the American Psychiatric Association, the symptoms of depression must last for at least 2 weeks to receive a diagnosis.

Depression can take several forms and present itself in different ways. You can’t always tell if someone is suffering from depressive symptoms. Sometimes, the symptoms are masked or sub-clinical. Since mental health issues, such as this one is a taboo topic, people tend to hide their feelings and force themselves to show up at social events and gatherings to avoid gossip.

What are the different types of depression?

Each form of depression is slightly different from the other: 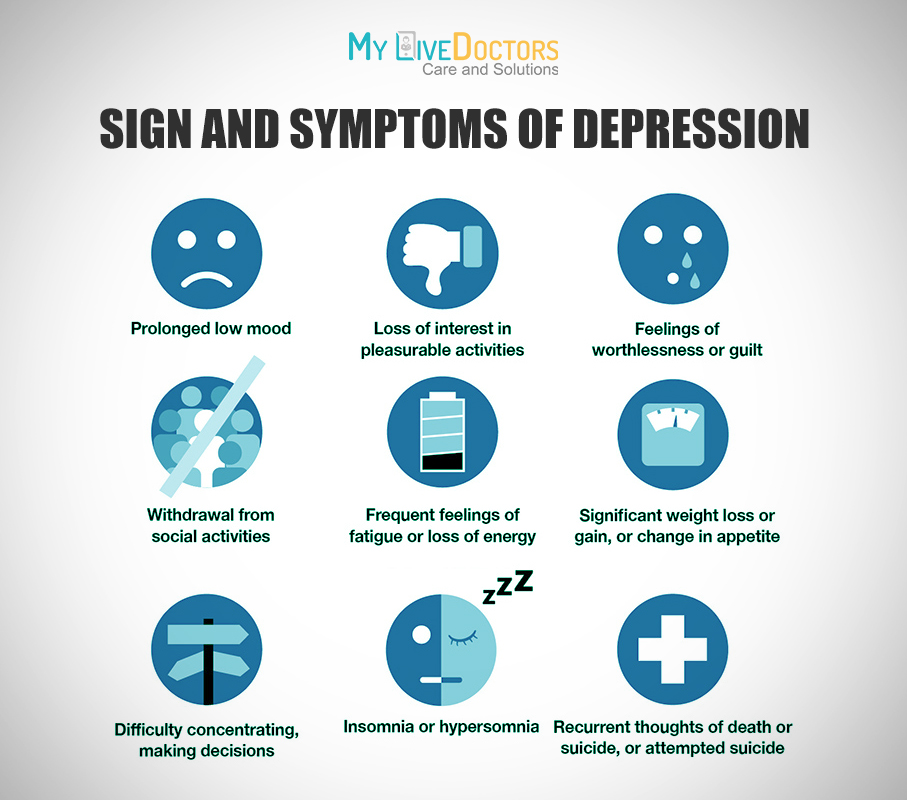 How do you know if you really have depression?

If you have been suffering from the following symptoms for at least two weeks or more, it is best to get evaluated by your doctor or a trained psychiatrist:

How does depression get so bad?

There are several factors that influence or contribute to depression. Some people might plunge into depression due to intolerable circumstances, unforeseen life events, loss of loved ones, ill health, personal or family problems.

For instance, grief is often confused with depression as there are long periods of extreme sadness. You may feel lost and overwhelmed by feelings of hopelessness, but as tough as this phase may be, the intensity of emotions tends to decrease with time. You eventually accept that ‘passing on’ is a natural and unavoidable part of life and learn to move on.

However, if this period of grief lingers and overlaps with other components of depression like feelings of loneliness, guilt and anxiety, over time, it should raise concern and professional help should be obtained immediately. Mounting anxiety can lead to panic attacks which will further increase the depression. It’s a vicious cycle. For beginners, you can see where you stand by taking an anxiety test online. It is a questionnaire which assesses your answers and provides you with a final score at the end.  It could be used as a self-evaluation tool at home.

If you think going to your doctor seems like too much of an effort, feel free to contact an online doctor at Mylivedoctors, one of the best medical apps for patients. Download the online doctor app on your smartphone and connect with qualified healthcare providers and specialists in your region or anywhere in the world. Sign up for FREE and gain access to quality healthcare from the comfort of your own home. Look up your doctor on a list and book an tele appointment with doctor right away and get the counseling and guidance you need. You can engage in an online medical consultation through phone calls, video calls, texts or email. Appointments on the phone usually give people more confidence and assurance without having to actually ‘show up’ for them. Mylivedoctors is a safe online space and an effective online doctor appointment booking system that is not only quick and convenient but much lighter on the pocket too.

Another strong associated factor that enhances depression and its symptoms is alcohol consumption. Alcohol and depression go hand in hand when it comes to neglect and misuse. Taken in excess, it turns into a substance of abuse which only worsens the situation. You tend to make bad choices while ‘under the influence’ and will probably regret them later. Intoxication leads to brain damage which will exacerbate the symptoms of depression. Some people even take their anti-depressants with alcohol, which is a BIG no! The alcohol counters the effects of the medicine and makes the symptoms harder to treat.

How do you treat depression?

Treatment depends on the severity of symptoms and how long you’ve had them. The earlier you get help, chances are the sooner you will recover. The mainstay of treatment is medication and psycho-therapy.  However, non-medicinal, more natural methods such as exercise and dietary changes may be tried as well.

Antidepressants are commonly prescribed by the doctor and may take 2 to 4 weeks for visible improvement of symptoms. So, don’t be quick to judge and do not stop taking them without doctor’s advice. Most antidepressants are tapered off gradually by the end of the course, which may last from 6 months to a year. Multiple medicines have to be taken during the day and some may cause fogginess and sedation.

Psychotherapy or counselling can be acquired at depression treatment centers or related institutions. A couple of sessions a week, spanned over a reasonable time frame can help overcome self-esteem and confidence issues as well as facilitate social interaction again.

Mental health is just as important as physical health, if not more. Living with depression is not easy.  Fight the taboo and be an advocate of mental health in your community. To find out more about mental health, please visit www.mylivedoctors.com.